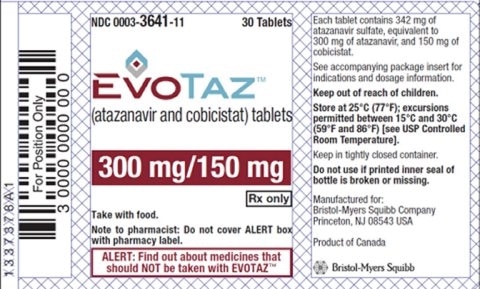 Evotaz is a medication used in the treatment of human immunodeficiency virus (HIV), the virus responsible for the development of acquired immunodeficiency syndrome (AIDS) in the human body. Evotaz is a combination medication containing two active ingredients, atazanavir (trade named Reyataz) and cobicistat (trade named Tybost). Atazanavir is a protease inhibitor (PI) antiretroviral medication that targets the virus’ ability to replicate itself into new DNA chains, while cobicistat is used to increase the longevity of the former in the blood, maximizing its efficacy. The drug was approved for use against HIV in 2015 and is marketed in North America by U.S. pharmaceutical company Bristol-Myers Squibb. It is presently considered the most effective combination of a protease inhibitor and cobicistat available.

What is Evotaz used for?

Evotaz is used in the treatment of individuals with HIV-1, or HIV Type 1, the most common and more infectious type of the virus. As a combination medication, it relies on the mechanisms of both active ingredients working in conjunction with each other to prevent the progression of the infection. As stated above, atazanavir is a protease inhibitor; its mechanism of action is to block the activity of protease, an enzyme in the body responsible for cleaving (or breaking down) protein molecules into small-chain amino acids, a process called proteolysis. Proteolysis is essential in the lifecycle of HIV, and the efficacy of PIs stems from their ability to bind to the protease molecule, halting the cleavage process. The second active ingredient, cobicistat, impairs the liver’s ability to metabolize other antiretroviral medications by inhibiting the behavior of CYP3A isozymes, a family of human enzymes that have been found to be responsible for shortening the half-life of certain oral medications. The inclusion of cobicistat as a pharmacoenhancer (an enhancer of the effects of other medications) renders Evotaz more effective at treating HIV than earlier CYP3A inhibiting PI medications.

How to Take It

Evotaz is available in the form of a pink tablet, intended to be ingested orally by swallowing the tablet whole. Tablets should be taken with food to maximize absorption and should not be crushed, broken, or chewed. Each tablet contains 450 mg of active ingredients, partitioned as 300 mg of atazanavir sulphate and 150 mg of cobicistat. As with other antiretroviral medications, Evotaz is intended to be taken along with other HIV medications, to reduce the risk of viral mutations. If the expiration date indicated on the packaging has passed, the tablets should not be taken.

Like other medications, Evotaz has been associated with side effects. These range from being mild and manageable to very severe, requiring urgent care. Prospective patients should consult their doctor regarding any other medications being taken, as these may increase the likelihood of adverse effects.

The following side effects have been observed more frequently:

The following side effects occur less frequently, but may require immediate medical attention:

In addition to the above, Evotaz has not yet been evaluated to be safe for pregnant women and has been shown to increase the risk of lactic acidosis in such individuals. As a result, pregnant women are advised to avoid Evotaz.

The standard dosage of Evotaz for patients aged 17 and over is one tablet daily, taken with food. Patients under the age of three months should not take the medication, due to an increased risk of kernicterus. The safety of Evotaz has also not yet been assessed in patients between three months and 17 years of age, and as such, no dosage recommendation exists for this group. In the event of a missed dose, patients should take a tablet as soon as possible. If 12 hours or more have passed following a missed dose, patients should instead take a single tablet at their next dose and should never take a doubled dosage.