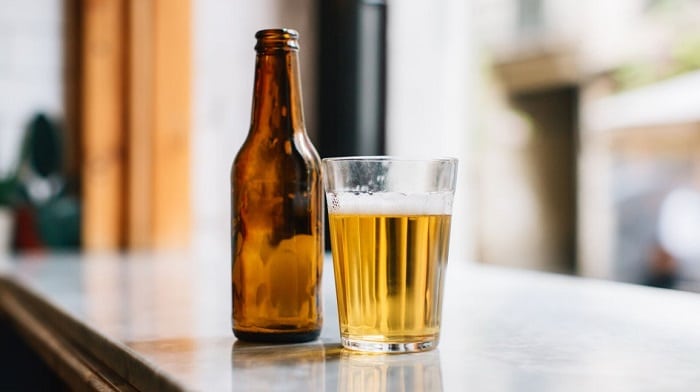 Treatment for HIV-infected patients has improved dramatically over the last several years. Almost all patients taking any form of antiretroviral treatment (ART) can achieve reduction in viral load and longer life expectancy. However, the success of ART relies heavily on patient adherence. Substance abuse, including alcohol consumption, remains an important factor that influences a patient’s compliance to ART. Evidence suggests that alcohol abuse is more prevalent among HIV patients than individuals without HIV.

The new anti-HIV treatment Genvoya is a fixed-dose combination tablet made by the pharmaceutical company Gilead Sciences. The complete regimen contains the newly formulated drug tenofovir alafenamide (TAF) 300mg, in combination with elvitegravir 150mg, cobicistat 150mg, and emtricitabine 200mg. Antiretroviral treatment cocktails in the past used the drug tenofovir disoproxil fumarate (TDF). TAF is said to be well tolerated in clinical trials and with fewer side effects than TDF.

To evaluate the safety and efficacy of Genvoya, 3,171 participants were enrolled in 4 clinical trials; all were randomly given Genvoya and another FDA-approved anti-HIV drug. Results showed that aside from reducing viral loads, Genvoya has less toxicity and fewer incidence of decreased bone density.

Genvoya is indicated for HIV-infected adults and children who weight at least 25 kilograms:

Certain drugs can interfere with the body’s processing of antiretroviral drugs. Interaction with these drugs can affect the levels of ART or both drugs in the blood. It may result to further exacerbation of pre-existing side effects or treatment failure. In the case of ART, falling below normal levels in the blood can result to drug resistance that limits future treatment choices. Patients must be made aware of all types of drugs that should never be used concomitantly with Genvoya, as well as prescription medications that should be taken at a later time and substances that must be consumed in moderation.

Why alcohol use should be minimized while under Genvoya therapy?

While alcohol consumption does not directly facilitate HIV transmission, its impact in the natural history of HIV and AIDS, treatment failure, and disease progression is paramount. The health implications of alcohol abuse goes beyond HIV. It ranks as the fourth most harmful substance with abuse potential next to heroin, cocaine, and methamphetamine. Excessive alcohol use is also linked to various acute and chronic diseases affecting almost all body systems. Alcohol affects the different stages in the natural history of HIV/AIDS: disease contraction, infection prior to antiretroviral treatment, and while receiving HIV medications.

Patients who are taking antiretroviral medications like Genvoya are at risk of developing liver diseases, such as fatty liver and hepatitis, or worsening existing liver problems. Excessive alcohol use has been known to accelerate liver disease, amplifying the hepatotoxic effect of Genvoya.

Since immunosuppression is the hallmark of HIV infection, patients with HIV and alcohol use disorder may also be infected with opportunistic pathogens, such as tuberculosis (TB). Heavy drinking has also been associated with general weakening of the immune system and increase in viral load.

Find out the cost of Genvoya at Kangaroo.co!

Excessive alcohol consumption can result in ongoing risky sexual behavior that facilitates HIV transmission and may even cause reinfection. Furthermore, patients under antiretroviral therapies may experience improved health and momentary relief from symptoms, leading to increased libido and complacency to disease transmission (i.e., lower condom use). [6] When an individual, under the influence of alcohol, engages in unprotected sex, viral superinfection (reinfection with a different strain of the virus) may occur. Rapid disease progression may arise and

Adherence to HIV regimen is vital for the success of ART. Drug and alcohol use may lower the efficacy of Genvoya and other anti-HIV drugs and negatively affect adherence. This has serious ramifications not just to the individuals involved, but also to overall public health.