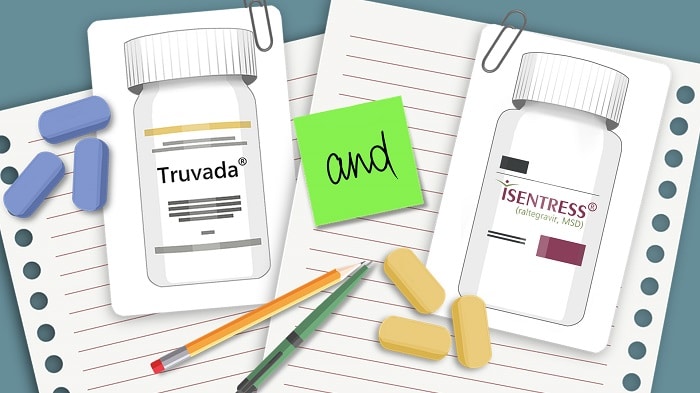 One of the standard regimens for treatment-naïve patients, based on the recommendations of the Department of Health and Human Services (DHSS), is a combination of Truvada + INSTI (integrase strand transfer inhibitor). Official HIV treatment guidelines are usually updated from year to year to reflect new findings from research trials and real-world effectiveness.

Until recently, Truvada, a two-drug combination of emtricitabine (Emtriva) and tenofovir DF (Viread) plus a third drug dolutegravir (Tivicay), is the mainstay treatment for pre- and post-exposure prophylaxis. However, in May 2018, the European Union’s drug regulatory agency and the European’s Medicines Agency (EMA) cautioned about the use of Tivicay in pregnant women with HIV. 3 The drug was linked to birth defects in a large observational study in Botswana. The Centers for Disease Control now recommends raltegravir (Isentress) in lieu of dolutegravir for post-exposure prophylaxis (PEP). The CDC issued statements in the avoidance of Tivicay for patients:

Truvada and Isentress combo for PEP

PEP has been found to significantly reduce the risk of HIV infection in cases of possible exposure to the virus. But in order for the preventive tool to work, it must be started within 72 hours of exposure, and the antiretroviral regimen must be taken for 28 consecutive days. Late initiation and missing a dose will render the drug ineffective. In facts, animal studies suggest that PEP failure rates increase within 48–72 hours of exposure. The CDC recommends Isentress as a preferred regimen for pregnant women and those of childbearing potential. Prior to initiation of PEP, all women who may possibly get pregnant must have a pregnancy test performed. If a non-pregnant woman is required to take Tivicay, she must use an effective birth control method throughout treatment. If pregnancy is confirmed in the first trimester, the patient should use the combination of Truvada and Isentress or other suitable alternative.

In the UK, a protease inhibitor (PI) combination Kaletra (lopinavir/ritonavir) used to be the drug of choice for PEP until 2014. Isentress replaced Kaltera in the same year because the combination of Truvada and Isentress is associated with fewer side effects compared to the previous recommendations. Raltegravir is also more rapidly absorbed than the PI combo.

Isentress is the first HIV-1 integrase inhibitor. It works by blocking the strand transfer activity of the HIV enzyme integrase, therefore preventing the integration process. While HIV can infect a cell, it cannot make copies of itself because of the inhibitory effect of the drug. Just like Tivicay, a similar INSTI drug, it can be taken without regard to food. In several studies, Isentress and Tivicay have both demonstrated efficacy as PEP, but the former was linked to slightly higher side effect risk and discontinuation rates. A two-year study comparing dolutegravir and raltegravir for the treatment of HIV-positive volunteers showed the following results:

To summarize, Isentress is a good alternative to Tivicay for PEP treatment in pregnant women and those who are planning to get pregnant. Results were similar regardless of baseline viral load and additional drugs or nukes in the regimen. Both drugs caused a relatively low rate of mild to moderate side effects in the first year of treatment.

You Can Check Truvada Prices at Kangaroo.co!